on March 03, 2018
I wasn't supposed to fly this day - certain life events made me a little cautious about the number of leaves I took during the year, and this made me rethink about the travel plan that I had for end of February. I had originally planned to take three days off and return over the weekend with family - with my new found caution for leaves, I decided to fly back on Friday after attending a family function late on Thursday night. My outbound was already booked on go Air (Read here). I looked at various OTAs for flight tickets, and found a deal on SpiceJet. I hadn't flown SpiceJet for a long time, and I booked a ticket without a second thought, along with a Seat+Meal Combo as well, since I would be flying around lunch time.

February 23, 2018:
I hadn't slept well that night, and I was feverish as I woke up around 0900hrs. I had to leave home by 1000hrs to make it to the airport on time for a 1310hrs departure. Noon is a peak hour for Kochi airport, and I had to account for the long security check queues as well. I rushed through the 'morning formalties' and left home a little post 1000hrs. I was still feverish, and had body ache - I badly wanted to get home and rest. I was successful in getting buses at quick succession till I was about 7kms away from the airport - I waited for while at the bus stop, and then decided to hire a cab instead. The tired and old Uber cab dropped me at the airport by 1140hrs.

The airport terminal entry had a long queue - similar to a Mumbai suburban ticket counter. I managed to dodge a part of the queue since I was travelling with only hand baggage. I headed straight to the SpiceJet check-in counters - a long queue there as well. The agent at the priority check-in counter saw me travelling with only hand baggage and signaled me to use the counter - helping me dodge some more crowd. I got my boarding pass by 1150hrs, and moved to security check. Again a very long queue - a confused queue actually. The CISF guards manning the queue had a tough time segregating gents and ladies into appropriate queues - three scanning machines were functional, and inner most machine had very few passengers. I cleared security by 1203hrs and headed to the security hold.

Security hold was one big mess - there were absolutely no seats anywhere in sight - I badly wanted to charge my phone as well - I roamed around the walls searching for a charging point, and finally found a set of empty seats at one corner of the terminal - each seat had a charging point, as a bonus! This area was earlier used by a food court. The terminal is bursting at its seams, and badly requires an upgrade. The terminal was hot - the AC could hardly manage the load due to the crowd. The aircraft for my flight had already arrived in from Hyderabad - and I was excited as I noticed the regn on FR24 - I was flying VT-SLB, one of the two B737-700s in the SpiceJet flight. I had flown VT-SLA twice earlier, and this was my long awaited chance of flying VT-SLB. Interestingly, VT-SLB was put on this rotation only a couple of days before my flight.

I left my phone to charge and hooked on to Facebook to spend some time. The first boarding call was made at 1226hrs - I remained seated till the queue shortened. Boarding was happening at Gate 3, while I was seated near Gate 1. I headed to the gate at 1235hrs, and got on to the bus a couple of minutes later. The bus took me to the aircraft, parked at stand #12, by 1241hrs. VT-SLB was painted plain white, with just the SpiceJet title painted on. The aircraft was named "Asafoetida" (hence the title). Asafoetida is offlate my favorite spice during cooking, and this flight was a perfect coincidence.

I was inside the 11 year old aircraft by 1244hrs - loads seemed really good. Overhead bins were already packed, and my backpack was fairly big to be left under the seat. FA Priyanka took the bag from me and offered to leave it in one of the bins behind my seat. Priyanka actively offered water to the passengers seated in the front rows while we waited for the next tarmac coach to arrive. Boarding was very slow - the process completed only by 1256hrs. The load was 100% - 149/149! Doors were armed by 1258hrs, and we were pushed back by 1259hrs. Captain Abhishek Azeem and First Officer Rashmi Sharma were in charge of the deck, while Chanchal was the senior cabin crew. The long taxi to Runway 27 started at 1302hrs - the taxi took 4 minutes, and we didn't have to hold before the runway. We entered the active runway by 1306hrs, commenced the takeoff roll and were airborne by 1307hrs. We climbed soon in a westerly direction, before turning around, and setting course in the North-East direction.


Seatbelt sign was turned off by 1312hrs. Carts came out in no time, and my pre-booked meal was served soon after service commenced. I had opted for Vegetable Stroganoff with Yellow Rice, which was served in a "box-in-a-box" serving along with a bottle of water. The box also had a chocolate brownie as dessert and a soft bun with butter chiplet to go along. I was not very hungry - my feverish feeling was yet to subside. I finished my lunch quite fast - the rice was perfectly cooked, and the Vegetable Stroganoff had vegetable cooked to perfection. The brownie was perfect - not too dry - as well.


The seatbelt sign was back on at 1329hrs, as we commenced descent. The FAs rushed with cabin clearance. We were overflying the city by now - HAL Airport was in sight, then we flew over Hebbal and headed to the West, before we aligned to the landing path. We finally touched down at 1354hrs, and docked at Stand 38 by 1356hrs. I remained seated till all passengers got off, since I had to search all overhead bins for my bag! I got off the aircraft by 1404hrs. The tarmac coach got me to the terminal by 1413hrs. I spent some time at the terminal talking to a friend who works at the airport. I finally got into a bus towards Yeshwantpur, and finally got home by 1700hrs! 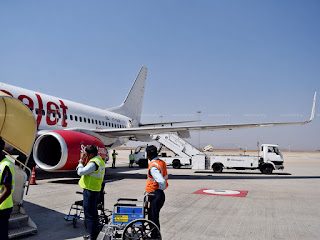 Summary:
This was my 13th flight on SpiceJet, 9th in their Boeing aircraft, and third in their B737-700 aircraft! They've been always a hit-or-miss for me - although no terrible experiences till date, but they've not been the best. I've always liked the food offerings SpiceJet had, and this flight was no different either. I always prefer calling SpiceJet a Value carrier than an LCC, and they've always met my expectations at that. This was another good flight with them - looking forward for my next flight with them!
Flight Reports