Rochester to Washington DC, via New York on Greyhound: Part-1

on May 21, 2017
While our (I and my colleague) plan to visit New York city was still being developed, another spark gets in. Why not go to Washington DC too? We had just one free weekend. I went through details of sightseeing spots in DC and we zero'd in on some spots to see. Based on this, we decided to make a very quick trip to Washington DC, spending a full day there. The final decision was to take a bus, traveling overnight, to Washington DC, spend the entire day in Washington DC, and take a bus back in the evening, to travel overnight back to Rochester. We first booked the outbound - since we couldn't really depend on our cards to book online, we headed to the Trailways bus station in Rochester to book our ticket. Transaction at the booking counter was really easy. The ticket had no less than 6 foils! One foil/coupon each for Rochester to Syracuse, Syracuse to New York and New York to Washington DC. Then one coupon to detail the itinerary, and one coupon to advertise the bus tracker and one to obtain feedback. 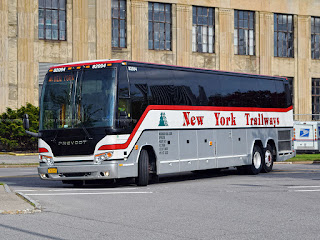 May 13, 2017:
The day was a little busy, with us having official work until noon. After lunch, we had retired for a while. Sometime past 1600hrs, I log into the Greyhound bus tracker, and punch in the service number (#0207). The website tells me, "To ensure we meet the demands of our customers we have more than one vehicle operating on this schedule at this time. We're sorry that this vehicle is not tracked." I wasn't really sure what this meant. I didn't want to break my head on this.

We leave home, a little past 1630hrs towards the bus station. Our host was driving us down to the Greyhound (Trailways) bus station. The bus station has fairly good waiting room with free WiFi, machines vending different things like hot/cold beverages, sandwiches and wraps, and quick snacks. They even had a microwave oven and water dispensers. The restrooms were clean as well. There waiting area, though not full, was quite occupied. Soon after we reached there, a Trailways bus to Buffalo departed, and a bus to Toronto arrived. Since the tracker was not working, there was no way of knowing when our bus would arrive. I wanted to take a picture of the bus, and walked out of the terminus building.


Just as I came out of the bus station, I saw a Trailways bus rushing towards the bus station (1740hrs). It was a Prevost H3-45 (#82094) and had its LED display displaying"New York". I was a little confused. My booking was for Greyhound, and this was a bus owned by New York Trailways. Maybe this was the additional vehicle that the Greyhound website was talking about. Or, maybe this is my bus. I rushed back to the terminus. I remained around Gate 1, where this bus had parked. Sometime around 1747, the PA system comes alive and announces that all passengers to New York should board the bus through gate #1. My guess was true - it, indeed, was my bus! Maybe this was a last minute substitution. Trailways buses are not equipped with GPS trackers like the Greyhound ones, and hence the Greyhound website couldn't track this bus.

The driver of this bus was wearing Greyhound uniform. He checked our tickets, and collected the first coupon, which read "Rochester to Syracuse". He informed that the same bus would go to New York, but the next coupon (Syracuse to New York) would be collected by the driver who joins at Syracuse. We managed to get a seat on the second row, and settled down. The bus backed out at 1805hrs - a delay of 15 minutes. The bus took the inner loop and entered Route 490, and then entered Interstate Route 90 at Victor. The driver meant business from the word go - the driving was very stable, though. I tuned in to a movie on my phone to get over the boredom as we rushed towards Syracuse.

We reached Syracuse William F Walsh Regional Transportation Centre by 1930hrs, about 5 minutes behind schedule. The driver announced that we have a 40 minute layover here, and the bus would depart only at 2010hrs. Passengers were free to use the restaurants in the terminus to get something for dinner. He asked all passengers to be back by 2000hrs. We rushed out of the bus to the terminus building. Before going in, I did take out some time to click some pictures. The terminus at Syracuse had neatly integrated intracity transit, Amtrak and intercity transit into the same building. The building had a good waiting area, ticketing offices for major operators, outlets of Subway and Dunkin Donuts as well. We decided to pick-up something from Dunkin Donuts primarily because Subway was crowded. We returned to the bus after we picked our dinner. The driver was yet to come, even as the clock ticked past 2005hrs.


The new driver came in a little past 2010hrs - our scheduled departure time. He had finished a walk around inspection of the bus. Soon after getting in, he made a welcome announcement, and informed passengers that he would be coming around to collect the "ex-Syracuse" coupons of the passengers on board. He locked the door and walked around. Soon after he finished collecting tickets, he opened the door for additional boarding. However, passengers traveling ex-Syracuse had boarded the "additional" bus which was boarding at the next gate. A couple of passengers joined our bus, and we started off at 2044hrs - 34 minutes behind schedule. The driver quickly pulled out of the bus station and headed towards Interstate route 81. Our next stop would be at Binghamton, as informed by the driver. I tried to sleep for a while, and did sleep on and off through the ride. We pulled into Binghamton bus station at 2200hrs, 25 minutes behind schedule. No passengers joined here, while a couple of passengers did get off. We started off at 2209, 19 minutes behind schedule.

I slept for a while after Binghamton, and woke up just as we were pulling into the Exxon fuel station at Gouldsboro for the rest stop (2328hrs). I got off the bus to use the rest room, and also to stretch a bit. We started from the rest stop at 0001hrs - 46 minutes behind schedule now. I had no hopes of the bus making up time, although the driver kept saying we'd reach NY on time. I was kinda happy about the delay, since the delay would mean lesser waiting at New York. Our connecting bus from there would leave only at 0345! I slept soon after we left Gouldsboro. That was one nice sleep, and I woke up just as the bus entered Port Authority Bus station, and the driver was making announcements on the PA system that we had arrived New York. The clock read 0154hrs - 39 minutes behind schedule!


Notes: The bus, #82094, was a 2010 model Prevost H3-45 intercity coach. The bus was powered by a Detroit Diesel Series 60 engine mated to an Allison B500 transmission. This 52 seater bus seemed really well kept despite its age. Although both the drivers drove really well, I felt the second driver delayed the bus a lot. Although the delay was acceptable in my view, it may not be for people who had connections. The WiFi was not working till we reached Syracuse - it worked perfectly well after Syracuse (after the second driver did a reset). Overall a good journey.