on December 29, 2016
I did not want to take a train to return from Gulbarga. I looked at all possible alternatives - there were hardly any AC options from Gulbarga - except the VRL Volvo, and an NEKRTC AC Sleeper. A friend suggesting traveling via Hyderabad - the run time appeared to be more or less similar, except the hurdle of having to change buses. I decided to book a train after I exhausted most options - I wanted a train that reached fairly early, so that I could head to office without much delay. After thinking and rethinking, I finally booked on the 22133 Solapur-Yeshwantpur Super Fast Express in AC 2-Tier. Luck didn't seem to approve my idea of keeping train the last option, and cursed me with a Side Upper berth - that too right next to the door! I kept pursuing the other options till a few days before the journey. It was on Sunday that I decided to stick to the train option itself.

December 13, 2016:
I was done with the examination work by afternoon, and my host treated me to great north karnataka meals - Jolada roti (unleavened bread made of jowar) with Lentil and Fenugreek soup accompanied with spicy Shengahindi (pounded groundnut chutney) and curd. The lunch was awesome, and I punctuated it with a short afternoon nap. I checked out of my hotel room sometime around 1930hrs for a 2105hrs departure. I was at the railway station some 10 minutes later. I headed straight to the platform to check if any delay was expected - but they informed an on-time arrival. I headed out of the station to have a light dinner. After a little bit of walking around, I opted a very small hotel - the hotel looked more like a tea stall or a local bakery. As I walked into Zeeshan Hotele, I was in for a shock - the hotel was quite crowded, and served only vegeterian food. The menu was small and simple - after a lot of thinking, I opted for a Zeeshan Special Vegetable Pulao.
The South Karnataka style of pulao is a spices ridden mashed up rice preparation, with an overpowering flavour of cinnamon and clove, usually brown or grey in colour with carrot and beans as a prime ingredient. I hate this preparation, which is locally called a Palav than a Pulao. I was expecting a similar product, although the images at the hotel showed something more delicious. It took them over 10 minutes to serve me - quite opposite to hotels in Bangalore where the palav is dumped on to the plate in under 2 minutes. What I got was a beautifully presented, yellow coloured preparation, with vegetables in large quantities to contrast the colour of the rice. It was accompanied by a very neutral soup. I enjoyed every bit of the rice - the flavours were subtle, it had a slight hit of sweetness, absolutely not spicy, but not bland. I shopped from some local sweets from there and headed back to the railway station.

I was a little sleepy, and the platform was a bit too crowded. I headed to the Upper class waiting room which was more or less full - but for a couple of empty chairs. I grabbed one. While seated there, the railway station had a RailWire wifi facility - which was free and didn't seem to have a limit. The signup was simple - and the connection was really fast. I remained in the waiting room till they announced the arrival of my train. There were announcements or indications about where my coach (A1) would arrive. After a bit of juggling around, I found where my coach would be, and walked in that direction. Even as the terrible speakers at the station blared out about the impending arrival of my train, a freighted hauled by twin WDG4s rushed past the station, in the same direction as my train - this meant we would have to wait for some more time for section clearance. 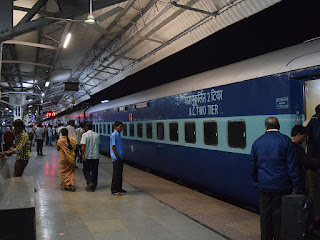 My train, the 22133 Solapur-Yeshwantpur Super Fast Express, pulled in at around 2116hrs, about 20 minutes behind schedule, with a WDM3D #11399 of Pune shed at the helm. My coach was again a run down coach, of 1998 vintage (WGACCW #98077), but recently overhauled. I settled at my seat, while leaving my phone to charge. I rearranged my bag a little, and stored it safely under the seat. We started moving from Gulbarga at around 2122hrs - some 17 minutes behind schedule. The Traveling Ticket Examiner aka TTE came around in a hurry, checked tickets and headed to his seat, which was right opposite mine. He was busy with some accounting, and I understood that his duty ends at the next stop. I wanted to sleep as early as possible - but waited till my phone had enough charge to survive that night. In the meantime, we pulled into Wadi station - the place where the train is handed over to South Central Railway, from Central Railway.

I did not note the departure time from Wadi, since I was already on my berth by then. My coach was already full, and the vestibule shutters to the nearby non-ac coach was locked, so were the entry/exit doors. A proper bedroll kit was supplied - with two clean white crisp bedsheets, a hand towel (a rarity these days), a good pillow cover, a clean and fresh smelling blanket, and a small pillow. I did not waste a lot of time spreading the bed spread - just put it over the berth and hit the sack. The coach oscillated like crazy - I wasn't really able to adjust to the oscillations - may be I am too old to sleep in a cradle now. The coach had a flat wheel as well, to compound my misery. I slept for a while, before being woken up by the frequent switching on and off of the cabin lights. I couldn't keep the berth curtains closed, since it made me feel claustrophobic, and also cut off air circulation. I struggled a lot to sleep, and slept in bits and pieces - a very fragmented sleep.

I hadn't kept an alarm, since I had to get off at the last station anyway. But a lot of alarms in the coach went off in unison, around 6.30am. I was literally forced off my berth by the alarms. I finally got off the berth around 0700hrs, and headed to the washroom to get fresh. The toilets were quite clean, but the overall condition of the coach was terrible, especially when passengers paid quite high fares for comfort of a two-tier sleeper. I stood at the door for a while, and realised that we were quite behind schedule. We were yet to reach Yelahanka, and I would be terribly late to office if I continued to Yeshwantpur. I quickly checked for cab availability and found lots of them at Yelahanka. Finally booked a cab as the train crawled into the station. I got off the train at 0734hrs (an hour and a minute behind schedule!) and rushed towards the cab. Although I ended up late, but could make it to office. But the lack of sleep had a toll on me.

There ended another train ride that I would rate average. I couldn't adjust to the oscillations the last time as well, and it repeated again. Its high time the railways scrapped those outdated ICF coaches and replaced them with newer LHB coaches, considering the safety and comfort of passengers. Trains do not seem to be a great choice for me yet. Although I did not enjoy this one, trains do have that soft corner in me, still. The ticket for this one was pricier than the NEKRTC AC Sleeper bus, and didn't really get me to Bangalore early, as I required. May be it was just bad luck.
railfanning

rahulvijayev said…
How can't trains have your soft corner Binaieta? After all, all this madness started on the Platform No.7!! :)