iFly 528 back to Bangalore: An Onam flight from Kochi

on September 17, 2016
After finding a way to reach home for Onam, the hunt was on to find the way back. I generally avoid taking buses on peak days since they end up reaching late most of the times, plus my rescheduled office timings make it difficult to get to office on time as well. I had two choices - an afternoon bus on Onam day or any flight on Onam Day. I chose the latter since they were priced similarly anyways. Evening flights were quite expensive. Finally after a bit of searching around, I opted for an afternoon departure from Kochi, and booked my return on IndiGo 528.

Monday was a happening day. A lot of things happened in Bangalore following a Supreme Court Verdict related to sharing of Cauvery water between Karnataka and Tamilnadu. Road transport came to a standstill - both the STUs and all the private operators pulled out services. Onam travel of a lot of people got cancelled. I thanked my fortune for having booked a flight, and not a bus.

September 14, 2016:
Leaving home is a very painful affair these days. I was all the more sad since I had to leave home on a festive day - not that we celebrate festivals with pomp, but its always a special feeling. I had initially planned to take a bus to the airport - but I was travelling with a lot of festival specialities and, I was really scared if the bus services would be normal on this day. My dad booked a vehicle, so that I could travel to the airport without worries. This decision turned quite appropriate since very few buses were plying on this day, and I might have got stuck if I waited for a bus.

The vehicle - locally called an Auto Taxi, dropped me at the airport a little past 1400hrs. The new terminal, officially called Terminal 3 seemed to be getting ready very fast. There was a long queue to get into the domestic terminal, called the Terminal 2. The queue moved very slow for reasons unknown. There were sufficient staff at the entry - may be they too were in the festive laze. The airport was very crowded, on the whole. The airport's runway closes for an hour in the afternoon, and there is a flurry of activity as it opens later.

After the slow moving queue to enter the terminal, I walked into another queue - this time for baggage scanning. About 4 departures were scheduled for the next hour and a half - this meant all the scanning machines were active, and all the check-in counters were busy. I got my bags scanned by 1415 and joined the check-in queue. A small but beautiful floral design (Pookkalam) was prepared by the IndiGo staff at the check-in area. I requested for a fragile tag on the bag - the check-in agent, Bineesh, marked the bag for limited release and put on the tags claiming "Fragile". I got my boarding pass by 1421hrs and joined the next long queue - for security check.
I finished security check by 1427 and entered the security hold. The security hold was crowded -thanks to the lineup of departures. My favorite seats near Gate #3 were empty. The aircraft that would work my flight, VT-IDN, was already at the gate - this aircraft lands right before the runway is closed and remains on the ground for over an hour. The apron had a couple of international visitors - from Sri Lanka and Oman as well.

Date of Journey: September 14, 2016
Flight No: 6E528 || Seat: 24F
Aircraft type: Airbus A320-232 || Regn: VT-IDN
Sector: COK-BLR
STD: 1525hrs, ATD: 1516hrs
STA: 1625hrs, ATA: 1624hrs
The first boarding call was made at 1454hrs. In fact, a long queue had formed just as the gate agent walked in to the security hold. The queue was already as long as the hall could contain by the time the boarding call was made. As usual, I remained seated for sometime more. I joined the queue sometime around 1500, and made it past the boarding gate by 1503hrs. It was a short walk to the aircraft - which docked right opposite to the gate. Since a Vistara A320 had just landed, the tarmac was a bit busy. I got into the aircraft by around 1505hrs - through the rear entrance. The extended time on ground meant the aircraft was very clean, fresh - but a little hot, though. India Delta November was delivered to IndiGo in October 2015 - this aircraft had its first flight back in November 2004, and has since flown for China Southern and Cyprus Airways. The interiors seemed to have been thoroughly redone - all seats were the newer Recaro slimline ones. The fittings were aged though.
Boarding was a little slow, and we completed boarding by 1514hrs - perhaps the first time I experienced a relaxed boarding on IndiGo. Doors were armed by 1516hrs - the flurry of announcements followed. The first round of announcement was made by the Captain - who welcomed passengers on board, gave out details of the flight and signed off with Sit back, relax and enjoy the flight. Another round of announcements followed - there was difference this time - there were no pre-recorded announcements. All the announcements were made manually, and the cabin crew incharge rushed through the announcements. In the deck were Capt Sagar Agarwal and Capt Rishab Mishra. In the cabin were Shilpa, Aishwarya,Sibani, Tabita and Greeshma (cabin crew in charge).
The aircraft was pushed back at 1519hrs. We had to wait until a Jet Airways B738 entered the apron. Taxi commenced at 1526hrs - and it was one long ride to the holding point of Rwy27. We reached the 27 end of the runway by 1531, directly entered the active runway, and held on for a minute before the take off roll commenced. We were airborne by 1533hrs. Takeoff from Rwy27 is always a beautiful affair - we climb straight to the West, and bank hard right soon after climbing, give a beautiful view of the airport as we turn North East to set course towards Bangalore. The seatbelt sign was turned off by 1538hrs, only to be turned on again at 1539hrs, with a warning for poor weather en-route.
The meal trolleys came out soon - three trolleys were used, and this effectively ensured that all passengers with prebooked meals received their meal before the seatbelt sign was back on. I opted to a Grilled Mediterranean Veg Submarine Sandwich in Multigrain Bread aka the Yellow Submarine this time as well. The options for beverage were very limited this time - I picked a Lemon juice this time. The sub tasted better than what I had on the outbound - it was softer, and the filling was wholesome. I had to hurry with my meal since the captain made a landing call as I was half way through my meal. Thankfully, the speakers in my zone weren't fully functional, and they cut off most of the barrage of announcements. The seatbelt sign was turned on at 1609hrs. We flew east, turned around and headed west to align with the ILS on Rwy27 of Bangalore.
We finally touched down on Rwy27 at 1619hrs. The touchdown was very smooth - smooth to the extent of not really realising when the aircraft touched down. We were welcomed to the apron by the aircrafts of Air Pegasus - who stopped operations recently due to financial issues - the three ATRs operated by them were parked right next to the taxiway. We taxi'd towards the contact stands, and docked at Stand #16, at 1624hrs. Passengers were already fighting for space on the Aisle as they hunted for their baggage - infact, the touchdown was punctuated with clank sounds of the seatbelts being unfastened. Wonder why people rush to get off the aircraft so badly. Although we were at a contact stand, IndiGo uses the rear exits also to ensure faster deplaning, and a faster turn around. I opted for the rear exit - used the stairs to get down and got into a bus, that took me to the terminal by 1636hrs. Baggage took a very long time to come - came out only by 1642hrs. I rushed out to a bus waiting to head to southern part of Bangalore - ending a very quick hop home for Onam!
Ratings:
Check-in: 5/5 (Did Online Check-in. Efficient Check-in crew)
Cleanliness: 5/5 (Aircraft was clean)
Punctuality: 5/5
Crew: 4.5/5 (Great crew this time. Just missed a smile though)
Catering: 4.5/5 (Good sandwich. Very limited choices, though)
Overall: 4.75/5 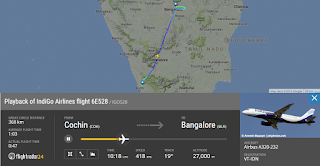 Summary:
A good flight with IndiGo this time. I felt the service was better this time - maybe because the crew were less hurried. The food was also great. Overall, a no-nonsense flight with nothing special to talk about.
Flight Reports