on May 21, 2013
I had been planning to visit Chennai solely with the intention of spotting some buses. The trip had been on the planning board right from mid 2012, when I had spent a couple of days in Chennai in connection with my first job after post-graduation. The pressures of the new job caught the best of me, and I had been mostly busy since then. Whenever I think of heading to Chennai, something else comes up, and I end up putting off the trip. There was one point when I almost booked a ticket to Chennai, but something else made me put it off. Then came a situation when I had booked a oneway ticket, but some health reasons made me put it off. Finally, the chance came up in mid-April 2013. I knew it was the wrong time to go to Chennai - the risk of getting fried in the heat there.

As soon I decided to go ahead with the trip, I booked my return ticket from Chennai - I had to return on a Sunday night, and hence had to make moves swiftly. I wanted to try the new Volvo sleeper of KPN, but by the time I made up my mind, all the lower berths were gone, and I was hesitant to try the upper berths. I remembered about VRL, and quickly checked their website - the bus was almost empty! Without a rethought, I booked on VRL - got a discount for using their website as well. Sometime later, I realised that I had a lot of other options - may that I hadn't tried earlier! Now comes the dilemma about choosing the operator for my onward journey. I wanted a bus that would drop me outside CMBT, not near the flyover. Some operators were ruled out due to this - while some others were ruled out due to the fare. The state operator was quite expensive, while a lot of private operators offered cheaper rates. I turned to my friends on FB to find out an option. Finally, after "rounds of talks" there, I chose Bharathi. Booked the ticket through a third party website, and pocketed a cool Rs. 115 discount.

April 19, 2013:
My brother dropped me at Madiwala around 2230hrs itself, although the bus was past 2300hrs. I spent some time talking to my acquaintances there. Some people warned that the seating in the bus I had booked was very tight, while some other told me there were better options. I was a bit worried now. By 2300hrs, I went to Alhind Travels, who handle Bharathi Travels in Madiwala. The scheduled pickup was at 2315hrs. As  I waited for my bus, the Greenline Travels 1+1+1 seater came in - I really regretted not booking that one, seeing the way the bus was kept. it was gleaming! My bus came in at 2314hrs - I was jumping up in joy, since the bus was perfectly on time! The passengers got it, and we started moving at 2316hrs! Wow! That was great! But my joy was shortlived as the bus moved ahead and parked somewhere near the Kallada office! Then a guy from the Alhind came around to check tickets. It was a long process, and we finally started off only at 2338hrs - a good 22 minutes late. 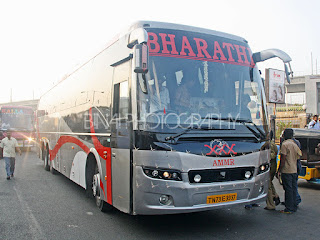 Soon after the bus started moving, the attendant came around distributing water bottles - 1 litre bottles for a 6hr ride! The driver meant business after he started off - he maintained decent pace. The bus did not take the elevated highway - went below the flyover. I always felt it was not worth paying the toll for journeys late in the night or early in the morning. We stopped for a passenger pick-up at Hosur, at 0032hrs. I slept even before the bus started from Hosur. I woke up suddenly hearing the sound of the bus hitting something, and then the sound of a flat tyre! Yes! We had a flat tyre!! The driver pulled over - the time was 0047hrs. So we weren't far from Hosur. I slept off again. I woke up hearing a kid in the bus crying out suddenly - the kid had a very peculiar pattern of crying - she just screams at the top of her voice - no pitch variations! The entire bus woke up - the attendant came rushing to find out if something went wrong. The kid receives two thrashings from her mother - the pitch of the scream increases! I keep wondering why do mothers hit their children when they cry!

The time was 0200hrs, and we were at Krishnagiri then. After struggling for some time, I regained sleep. This time it was one continuous sleep. I slept till the attendant came around calling for passengers getting off at Poonamalle - it was 0550. We dropped a passenger and continued our run. The bus took the Poonamalle-Porur-Guindy-CMBT route. Our next drop was at Guindy - 0610hrs. By now the entire bus had woken up and people were getting ready to get off at different places. A passenger seated behind my seat was frantically trying to find out where we were and where would he be dropped. In the meantime, we rolled to Ashoka Pillar - 0617hrs. We were accompanied by some other buses now - including an NJK Mercedes Benz, and some SRM buses. We had another drop at Vadapalani - 0623hrs, and kept proceeding. The bus finally dropped me outside Koyambedu CMBT Metro bus terminus at 0630hrs - a good one hour late.

End Remarks: The bus, TN-73-E-3437, was maintained fairly well. I could not notice the odometer readings since the crew had left somethings on the dash. The interiors were in fairly decent shape - seats were clean and the blanket too was very clean. It appeared like the bus had quite a lot of regular clientele. I felt that the leg space was on the lower side - may be due to the higher reclining angle of the seats. The driving was really good - minimal honking, no rash cuts, no overspeeding. The puncture ended up taking quite some time - delaying our arrival in Chennai. I liked the service in total - and would like to try them again, may be when required. The end-to-end running time was on the higher side, at 6h52m, though.

vinchel said…
The Bharathi bus looks just like new . One personal question : what exactly do you do in busfanning? Because once I took a MTC bus pass and went to CMBT. Morning just few local operators were there but from 5-9pm got real sightings...... .I needed to improvise on this thats why.. :)
22 May 2013 at 23:44:00 GMT+5:30