on April 03, 2011
This was a hatrick of rare sorts for me.. watching a movie every weekend for three weeks in a row. Another specialty was watching all the three movies that released over the past 20 days, watching all movies within 3-4 days of release. The first two weeks had very average movies, while this week takes the cake with a masterpiece. Yes - Am talking of Santosh Sivan's magnum opus, the second costliest movie in Malayalam, Prithviraj's own production - Urumi. 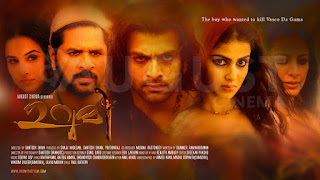 I must admit I purchased tickets for this movie with huge expectations - and I wasn't disappointed even a bit. The past two movies of Santosh Sivan - Ananthabhadram and Raavanan (he was the cinematographer for this one), were gripping. While Ananthabhadram literally scared the wits out of me, Raavanan had jaw-dropping visuals and was an excellent piece of cinematography. I watched the movie at the recently renovated Asoka A/C DTS hall in Kodungallur. I was amazed to see that the hall was full (packed to capacity) for a noon-show on a Sunday! All seats were sold - and patrons were in well before the show began.

The common talk about the movie is that this piece of work talks about a boy who wanted to kill Vasco-Da-Gama. Given this 'concept' one would expect this movie to be in the lines of Pazhassiraja (the MT Vasudevan classic, starring Mammootty). But, Santosh Sivan had something different in mind - Urumi is a fiction movie based on a few historical incidents. The script is very convincing, and has been presented in a very interesting and gripping way. The movie revolves around two easy-go youth, Krishnadas (played by Prithviraj) and his friend (played by Prabhudeva), who are in deep financial mess. A big corporate offers him a grand sum for his ancestral property. The story unfurls as a flashback, when Krishnadas goes to his native to sell off the property.

The main story is set in the 1500s, when Vasco da gama 'discovers' India. The movie portrays the cruelty unleashed by the Portuguese on the locals. The movie talks of some incidents that have not been heard of in the past. The central character in the movie is played by Prithviraj (playing Kelu Nayanar). He is ably supported by his child hood friend Prabhudeva (playing Vavvali). Prabhudeva plays a witty role, and his mannerisms were well appreciated by the audience. Kelu Nayanar is a brave hero, with the sole ambition of killing Vasco Da Gama (played by Robin Pratt). Kelu's father (Chirakkal Kothuwal, played by Arya) was brutally killed by Vasco Da Gama, which instills the fire in Kelu to kill Vasco. Kelu makes a golden Urumi (a double sided flexible sword made of metal) to kill Vasco. The movie revolves around Kelu's brave attempts to kill Vasco, and whether he succeeds in his aim is the suspense. 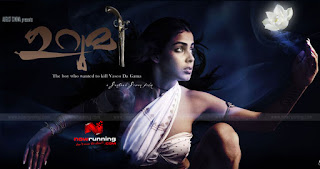 During the course of his ambition, Kelu comes across Chirakkal Ayesha (played by Genelia D'Souza). Genelia plays an unusual role, far from the regular bubbly roles that we are used to seeing from her. Genelia does an amazing job as well - traces of he bubbly character does surface once in a while, but she has taken efforts to portray the role with utmost seriousness. Amol Gupte plays an important role in the movie, as Chirakkal Thampuran who plays to the tunes of his minister Chenichery Kurup (Jagathy Sreekumar). Jagathy was performed excellently as a man with womanish body language. Tabu plays a cameo in the movie, appearing only in one song sequence. Vidya Balan plays Makkom who appears in a song - an item number of different sorts. Nithya Menon plays Chirakkal Bala who is impressed by Vavvali. She perfoms an amazing song flawlessly, and steals the show most of the time.

The cast is huge, with lot more characters coming in and going out often - the movie has actors from most states in India, and all of them have been brought under the umbrella very well by Santosh Sivan. The songs in the movie is done by Deepak Dev. There are 7 songs in the movie, interspersed between scenes in an excellent manner. The number of songs appears high for a movie dealing with a serious subject, but the songs have been used well to support the script. The re-recording is excellent - background music has been scored really well. I did feel some resemblance to a particular song from the movie Guru at many places - especially the song featuring Vidya Balan.

Dialogues are crisp - really crisp. There are quite some vulgar references - but all in chaste language. The dialogues impart natural humour - without the conventional slapstick methods. The dialogues surely had the hall blast off in laughter. The dialogues are written in the typical accent of Northern Malabar. Dubbing artists have perfomed excellently - lip syncing for the non-malayalee actors have been done excellently. Prabhudeva dubs himself for this role - which is a malayalam speaking tamilian character.

The movie is a masterpiece in all respects. At 170 minutes, the movie grips viewers to the edge of their seat through the movie. This movie is certainly not for people who are looking only to laugh through the movie - this one is a serious masterpiece. The movie has comedy, romance, thrills, suspense, all laced with in flavour of revenge. The movie has been made in an unconventional format - a period drama without too much emphasis on the minute historical details, made in an easy to comprehend format. There are no bombastic dialogues, no over reacting hero playing to the gallery every time or unwarranted cheap comedy. Actors have been cast very well - all characters have a well defined role to play, and have done a very justifiable job. 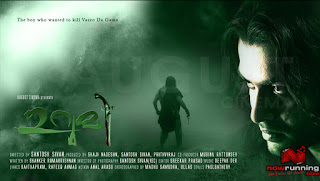 The movie talks from an unseen point of view - talking from the point of the oppressed.The cinematography shows the seas from an unseen angle. The angles are swift, taken brilliantly. The cinematography has the Santosh Sivan stamp everywhere. So intro scenes resembled Ananthabhadram, while some other scenes resemble Raavanan. My only grouse about the movie is the choice of location.  The movie is shot in jaw dropping locales, but the surroundings hardly resemble Kerala. The greenery was so typical of rural Maharashtra, and terrain no where near that of Kerala. I hoped Santosh had considered the forest range around Chalakkudy for this movie - that would have effortlessly portrayed Kerala. Malshej Ghat (in Thane District of Maharashtra) is no doubt an excellent place!

Rating: 9 on 10 - strictly from a common viewer's point of view. I am not a movie critic by profession, and hence the review is from a viewer's point.
movie review