on April 16, 2011
This year's Vishu set a battle between the two big M's of Malayalam Cinema. I had the mis-fortune of watching one of them - and have no energy left to watch the other.

How many times would have seen Suraj portraying a local goon, getting beaten by every tom-dick-and-harry in town, and finally getting thrown around? I have lost count of seeing him in such roles. Back in the 90s, Jagathy Sreekumar had specialised in such roles, and Suraj seems to take over the crown from Jagathy. (Jagathy is a classic actor, and he is beyond comparision with any other actor today in the industry). 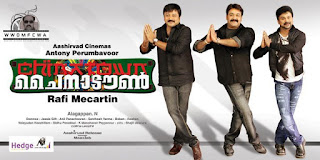 China Town is an attempt by Rafi Mecartin, who are known for good Comedy-Suspense movies, to re-create their magic. The movie is yet another multi-starrer, featuring Mohanlal, Dileep and Jayaram. The movie falters right from scene 1, and is no where near the magic of Rafi-Mecartin Movies of the past. China Town follows an age-old thread of dad getting killed by don, and son getting out to revenge the don. The only difference here is that, three dads get killed, and their sons are on the prowl.

The movie starts off with a flashback scene - set in 1986 in a place called China Town in Goa. The dads run a casino is Goa (Goa is the only state in India, where Gambling is still legal), called Four Star. They get killed brutally by a don, Gowda (Pradeep Rawat, of Ghajini fame). There are four partners, of which three get killed. The Fourth partner, Gomez, returns years later (played by Captain Raju) and starts a new Casino. He finds out the sons of his lost partners, and bring them back to Goa. The sons, Mathukutty (Mohanlal), Zachariah (Jayaram) and Binoy (Dileep) then get on the prowl to take revenge on Gowda. 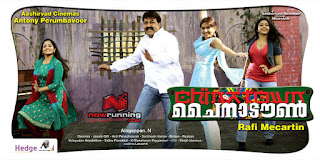 Mathukutty is a local goon, while Zachariah is a broke businessman. Binoy is a serial lover who goes behind any girl he sees. The introduction scene of Mohanlal is comical, and the actor has shown his dedication in most of the scenes. Dileep plays the same old comical lover in his introduction scenes. The heroines in the movie, Kavya Madhavan, Poonam Bajwa and Dipasha, do not have much to do, other than dance around with the heros. The first half of the movie is rollicking, with lots of slapstick comedy and the heros shouting out aloud at each other. Suraj plays the comic don yet again - getting beaten and thrown around by our heros! A good majority of the scenes in the movie seems to have been copied straight from a few older movies - especially the scene where Dileep plays a paralysed guy in front of a girl (Dipasha) only to get beaten by Mathukutty and Zachariah, and still act like nothing has happened.

The second half is outright confusing and abrupt. All the suspense, as they call it, happens in the second part. The second half has a lot of drunken brawls, confusion in every scene, and infighting. Suraj offers a white powder to the heros, which induces "dementia" to the hero and confusion ensues. Finally the movie ends abruptly, so abruptly and people were still gaping at the screen! Imagine seeing "Directed by blah blah" all of a sudden on the screen! But wait - there were more things happening even as the end credits start rolling - the background score seemed as if it was recorded at some  theatre, with lot of people shouting at each other! 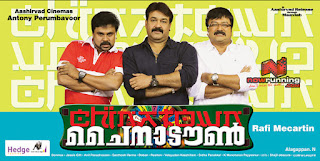 Mohanlal has proved that he is one dedicated actor - the actor has performed dance sequences with utmost ease. Lalettan feels at home as he dances on screen. The heroines have been totally wasted in the movie. The movie shows a warning which reads "We do not support atrocities against women" (or something like that - the warning is apt, since the roles the ladies play in the movie is more of an atrocity! They have nothing to do, but play eye-candy! The two northies in the movie Pradeep Rawat and Bharat Dabholkar do exactly what bollywood actors do in Malayalam - they speak in malayalam to the characters in the movie, but they talk to each other in Hindi! And, the whole of Goa speaks Malayalam!! Quite of lot of the intro scenes were shot in a set - and that was obvious everywhere.

Last but not the least: Dileep has done a very decent role - he feels at home while playing that stupid romeo. There are quite a lot of humorous scenes, thanks to him. Suraj has portrayed that local goon character for the nth time, but he has done it decently. Overall the movie lacks any logic - but if you love Slapstick comedy, this is the movie for you. The story ends abrupt - perhaps the script writers did not find an apt ending, and had to meet the deadline.

Verdict: I'd rate it a 3 on 5 (7.5 on 10). Leave your brains at home, and laugh your stomach out! Go for it if you are looking at laughter riot.
movie review