on September 15, 2008
The "One Rupee" ride on BMTC volvos ended yesterday after long 4 days. The deal that BMTC offered was to ride to any place on a Volvo for just Re. 1!!!

Newspaper reports suggest that these red whales carried as many as 18,000 on day one [DH, Bangalore] of the offer. Volvos, which were earlier seen running with enough empty seats (barring the ones to the IT parks), were seen running with no space to spare! Passengers flocked into these buses to enjoy the air-conditioned comfort - with many people traveling just for the sake of it!

The ride starting hitting autos badly by day three. The buses reportedly sold 72,000 tickets on Day 1 and 97,000 on the second day!!! One incident of a bus breaking down annoyed passengers and activists, but the gimmick seemed to have worked for BMTC. 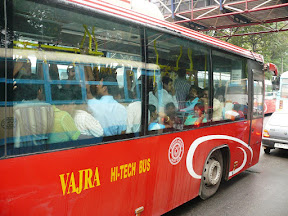 On all the four days, many passengers who earlier used to purchase full tickets for volvos, decided to give those red buses and miss and resorted to traveling "comfortably" in the normal buses instead!

Bangalore is, however, all set to see a red revolution. BMTC commissioned about 50 buses in one single day. Earlier, all the Volvos were housed at a single depot (Depot-07; Majestic), but now they are spread to other depots as well!!!! For the first time ever, BMTC Volvos now carry depot markings on them!!! 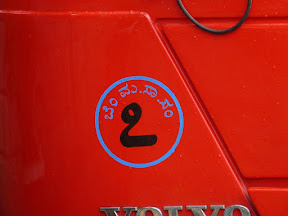 The bus in this image is from Depot-7, as indicated by the marking on it.

The crowd in those buses over the past four days was mindboggling. Interestingly, I saw one today in the morning - back to its old stage, searching for passengers!!!!

Now, the minister plans to announce a weekend discount on these red buses!!! All the best to BMTC... just spare those good ones from going the way the old buses did! Keep them clean and fit to showcase the so-called modern outfit of the city!
Busfanning

Vrijilesh Rai said…
These Volvos are a good move. I enjoyed my hour long rides to ITPL from majestic and back last time I was around in SBC. Costed me 55 bucks but then it was ok. Probably, BMTC would do better to reduce the fares slightly to increase their turnovers and profits.
15 September 2008 at 20:54:00 GMT+5:30

Manish said…
BMTC commissioned about 50 buses in one single day.

Nice! Now I hope to see them on more routes soon - particularly on the ORR (500A) between Banashankari and Hebbal, where there is a great demand for them.

Earlier, all the Volvos were housed at a single depot (Depot-07; Majestic), but now they are spread to other depots as well!!!!

They are also housed at Hebbal (depot-28). Aware of any others?

Now, the minister plans to announce a weekend discount on these red buses!!!

Good idea. But to have maximum effect, they should stop at areas frequented by shoppers - Commercial Street, Forum, Garuda etc. They can pose very effective competition to autorickshaws, if managed well!

Probably, BMTC would do better to reduce the fares slightly to increase their turnovers and profits.

Vrij, how would they increase turnovers and profits by reducing fares?