How is a train stabled?

on September 23, 2008
Many of us would have seen trains (or their rakes) parked in vacant loop lines or at sidings at different stations. Rakes of weekly trains, especially ones which come calling from other zones, are normally parked at a vacant siding line till the time the rake returns back to its home.
One such train is the 2691/92 Chennai-Bangalore Weekly express. This train leaves from MAS on Fridays at 2330 and arrives Bangalore at 0555. The train returns only at Sundays, departing from Bangalore at 2300, arriving Chennai at 0515. The rake is shunted from Bangalore City at around 1045 to Bangalore Cantonment. The rake remains at Bangalore Cantonment till 2100 on Sunday, which is then shunted to City station for cleaning and departure back to Chennai.
I was witness to one such shunting recently. The rake is stabled at Cantonment due to space crunch at the City station. On Sundays, the problem gets worse with the arrival of one more weekly train. This train however is sent to Whitefield!
Here is a step-by-step procedure of what happens: 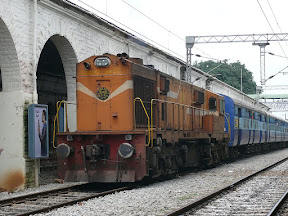 1. The rake is shunted on to the loop line between Platforms 1 & 2 at Cantonment Station by a suitable loco.
2. The loco is then "cut-off". The rake formation brakes remain on, and the hand brake is applied inside the Loco end SLR.
3. The "equipments" required for stabling the rake is brought out: 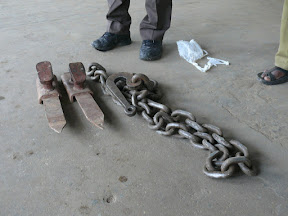 The "equipments" basically comprise of a couple or two of "stoppers" or "wedges" and a chain with lock (or two). 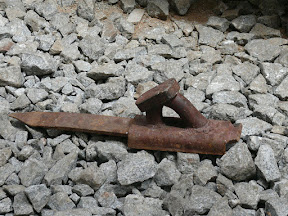 This is a close-up of the metal "wedge" or the "stopper". It basically consists of one flat plate, and a trangular protrusion on it which potentially could stop the wheel from moving ahead. 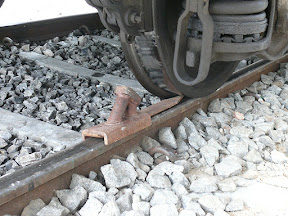 4. The "wedge" is placed on both sides of the "bogie" (or the "truck") to prevent it rolling to either directions. In case the wheel rolls forward, the wheel would run on to the "flat plate" which would hold the entire "tool" in place due to the weight of the wheel on top of it. In earlier days (and even today) wooden wedges were placed. Wooden wedges could slip off the tracks, or it could get crushed under the weight of the wheel. This improvised "tool" would not let it slip off. 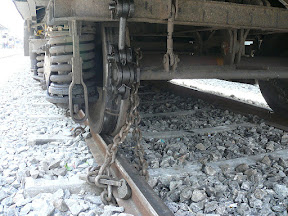 5. After the "wedges" are placed. The next measure is to lock the bogies in place. A heavy chain is used for the purpose. The chain has a "curved" metal piece at one end, and a ring at the other. The curved piece has an "eye". A small area under the track is cleared of ballast and the chain is taken through it. The other end of the chain is taken around the "axle" of the rear wheels of the rear bogie of the rake. The "ring" at one end of the chain is inserted on to the curved metal piece and the lock is put on the "eye" of the metal.
6. The hand brake of the rear SLR is applied.
The rake is now ready for sunbathing over the next two days!!! One question that was asked whether the chain could actually prevent the rake from moving, wouldn't the rake crush the chain under it. The answer given was that the chain would signal to the shunter at the other end and the train would stop before it starts gaining momentum.
So, now you know how is a train stabled ;-)
railfanning

Unknown said…
nice post.. i have also seen the stabling at thiruninravur siding track, but this station is near about 25-30 kms from MAS. the Grand Trunk was the one. i wonder why this train is stabled here that too far from MAS which is not GT ruote too.
regards Shankar, chennai.
15 December 2009 at 09:06:00 GMT+5:30