on May 13, 2007
A petty reason saw me travelling to Vikhroli on Saturday. I was planning to travel in the afternoon, so that I'd get to see the Matsyagandha and the TVC Holiday special. I left home at around 1150. The train I was intending to board was to depart Belapur at 1159. So that was too close for comfort. To add to my woes, some road repairing works are in progress around the I area I stay in, and I have to take a long detour to reach Belapur station. It adds up to about a kilometre (to the existing 2.5 kms) and it also involves a Traffic signal which is manually controlled! It would, by anyway, take atleast 15 minutes to make it to the station. I decided to board the train from Seawood-Dharave - The next station after Belapur while travelling towards Kurla.
The train reached SWDV (the railway code for 'Seawood-Dharave'). The first class coach had hardly around 3-4 passengers inside, and one was free to choose seats! I selected a forward facing window seat on the Right hand side of the train. The journey was dry till the time we reached Kurla. Just at Kurla Outer, I noticed a Pune WDG3A checking her horn inside the DLS.
I got down at Kurla, and decided to wait till the holiday special goes. The next scheduled EMU on that platform was only at 1315, while the special would be passing by at around 1300. I walked over to the end of the platform, and waited patiently for the special to turn up. The special... 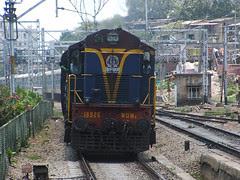 ...turned up with WDM2 #18926 of Kalyan in charge. The rake was 18-coaches long, and appeared clean! I turned back, and started walking towards the FOB, while I noticed another train entering Platform 6. That was 7032 Hyderabad-Mumbai Express with WCG2 #20116 in charge! I then rushed over to Platform 1, and took a slow local towards Vikhroli. I spotted two WDS4s shunting rakes into Lokmanya Tilak Terminus. One of those locos immediately caught my attention, and I decided to get down from the train to take a photo of those shunters! The loco that caught my attention was WDS4 #19465 of Kurla. The loco had a new livery. Joining 19465 was #19451 shunting another rake into LTT. #19465 was shunting the rake of LTT-Guwahati Express, which should have departed LTT in the morning at 0750! A close up of #19465: 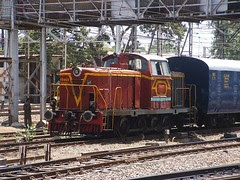 After the photos, I took another Slow EMU to Vikhroli. Just as my EMU was pulling in, a WCG2 rushed past with the Chennai-Mumbai Express. Just as I was on the FOB, a WCG2 rushed past with the Mumbai-Hyderabad Express. I had to meet a friend of mine, and we had a small chat before I returned. I took an EMU and got down at Ghatkopar. Now, I wanted to see the Matsyagandha Express.
Just minutes after I reached Ghatkopar, WCAM3 #21941 rushed through with a heavily delayed LTT-Guwahati Express. The train had an interesting coach arrangement: Loco-VPU-SLR-GS-GS-S1 to S6-A1-AS1 to AS3-PC-S7 to S11-GS-GS-SLR! The AC coaches were sandwiched between sleeper coaches! This train ensured that the 1411 Karjat Fast EMU, and the Mangalore bound Matsyagandha Express were late!
The EMU crawled into Ghatkopar at around 1415. The Matsyagandha Express normally follows this EMU. Just as the EMU was about to move out, a late running Howrah-Allahabad-Mumbai Mail rushed towards Mumbai CST with a WCAM3 in charge. Now this further ensured that the Matsyagandha was late! Finally, Matsyagandha crossed Ghatkopar at 1423 with WDM3A #18596 of Erode in charge. The loco was a very good smoker, and the smoke created by the Loco as it notched after entering the Main line was awesome. I couldn't take a photograph since the loco was too far for the camera to focus!

I returned back to Kurla in another slow EMU. While travelling in the EMU, the Mumbai-Chennai Express crossed me. I got down at Kurla, and moved over to Platform 7/8. I spotted that the WDG3A inside the DLS was now ready to move out. I decided to wait till the loco goes by. Some time later, I spotted the loco moving out. I moved over to the end of the platform to get a better image. The loco was WDG3A #13052 of Pune. The loco was tugging a live WDS4 behind. The loco would crawl its way to Dadar and then take the KR3 passenger towards Ratnagiri in the evening. Just about 2 minutes after the loco went through, the KR4 Ratnagiri-Dadar Passenger was seen at a distance. The loco in charge was... 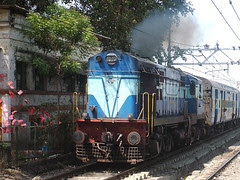 ...WDM3A #18764 of Pune. The loco had a red at Outer, and was furiously notching its way into the station! I then took a Belapur EMU, and got down at SWDV. There ended a short railfanning day!