On the Kallada to Bangalore 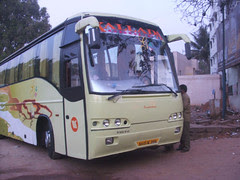 The journey was unexpected! I had just reached Thrisur from Mumbai by Netravati Express, and my dad signaled the green flag for my journey to Bangalore. I rushed to a travel agent right outside the station, and enquired for tickets to Bangalore that evening. surprisingly, tickets were indeed available for the bus in the evening! The bus was scheduled at 2130. He issued me tickets (it cost me Rs. 650).
I then went to my home, 32 kilometres away at Kodungallur. I returned back to Thrisur in the night. I reached the travel agent's place at around 2015, and the bus was at 2130. He issued me a boarding pass for the bus, and my seat number was 03. I had a small round at the KSRTC bus station right behind the travel agent's office. A Bangalore bound bus was waiting there. I came back to the travel agent's office. I decided to browse the internet for some time till my bus came.
There was another bus, but the same operator - Kallada, at 2100. Kallada is a very old travel company which has its base in Thrisur. The buses are mostly registered in Bangalore. They are one of the biggest operators in the Bangalore-Kerala route, with their buses to most destinations in Central and Southern Kerala. The bus scheduled at 2100 turned up at 2130, and my bus too was right behind that 2100 bus.
My bus was KA 03 AC 2000. My seat was right behind the conductor. The bus left at 2135, and we reached the highway by around 2200. There was a pick up from Palakkad Bye-pass. We reached the Kerala-Tamil Nadu border at around 2330. Almost all the buses (private ones) stop there, and the drivers get together to have some refreshments! The bus left about 15 minutes later.
I had a short nap, and by the time I got up we had reached Perundurai. The time was 0100. Perundurai is the place where we bye-pass Erode - a big city in Tamil Nadu. The driver changed here, and the new one had a very adventurous style of driving. He preferred driving off the road!
The halt was about 30 minutes long, with the engine running idle all the time. The bus has semi-sleeper style seats, and hence sleeping was comfortable. I had another short nap, and by the time I woke up we were at Bhavani. I had one more nap. I was woken up by someone who was getting down from the bus. The time was around 0535, and we had reached Bommanahalli by that time.
I called up my brother (who was to pick me from Madivala). The helper walked around waking up people who had to get down at Madivala. The bus reached Madivala at around 0550. Auto-drivers were hanging around and offered me ride to any place in Bangalore! The bus proceeded towards Kalasipalayam (its end point) at around 0603 (just after I took the snap above). My brother came at around 0620, and I reached home at around 0650 or so!
That was my first journey on a private Volvo. The bus was noisy (poor maintenance!), and the whines of the engine was clear in the front row also! The cleanliness was okay (I was in the first row itself!). The driving was scary at times, and we had a just miss at one place. Overall - The bus gets 8 on 10!
Busfanning

Cipson said…
That was really interesting
Yesterday I also travelled in Kallada from a different location.
http://kickink.blogspot.com/
2 May 2007 at 17:49:00 GMT+5:30