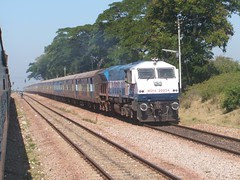 Finally the 8 Day long trip is ended. The trip had me travelling 3586 kilometres in 10 different trains over a period of 8 days. The final part of the journey was: Yeswantpur to Dadar by 1018 Chalukya Express.
The loco for this train was WDM3A #17910R from Pune. My coach was AS1 (WGACCN 03130A, based at Dadar Terminus). The train had 14 coaches in the following formation: Loco-SLR-GS-S1 to S7-AS1-A1-GS-SLR-VPU. The rake was the same one in which I did the DR-YPR journey!!! The coach was built in April 2004 by RCF,Kapurthala. The coach had moulded toilets. The fittings were in good condition.
The train was late by an hour at Belgaum, Half-an-hour late at Miraj, and ON-TIME at Dadar. The train pulled into Platform 8 of Dadar right at 0720. I took an EMU from Dadar to Kurla, and thence to Belapur CBD.
The food served on this train was too tasty to resist - especially the Vegetarian meals served for Dinner by Ghatprabha Vegetarian Refreshment Room. That was mouth watering!
A detailed travelogue of the of the entire series will come up very shortly, and the links will be put up here.
That's it for today. I am too tired of the journey......Bye ;-)
railfanning