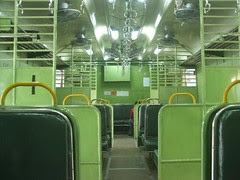 Today, I got an opportunity to have a look at the interiors of the newly introduce Jessop rake on the Thane-Vashi route. This new rake is now regularly working the 16:05 departure from Thane, and I am regularly making it to the station by then! The train reached TNA quite early, and I decided to have a peep inside the First class coach. (Seen in the Image above).
The seating is quite soft. Paint works are far better than the one in the Second class coaches. The fittings were better, and the finishing was even better. Click on the image to get a better view of the coach.
Now the Unfortunate Incident: The train exited Rabale station (This station is under-construction and is expected to open on Nov 14. Currently trains do not stop here.), and covered almost half the distance to the next station - Ghansoli, a boy standing at the door shouted that an aunty fell down. I rushed to the door, and by this time the brakes were being applied and the speed of the train decreased drastically. The train was on a curve, and the point where someone fell was already not visible. The train came to a screeching halt, and then continued journey after about a minute or two. Just as the coach cleared the curve, I saw people crowding at the place. Hopefully, she/he isn't badly injured.
The train stopped for sometime at Ghansoli (about a minute or two), and then again at Koparkhairane for about 2 minutes. At KPHN, I saw some railway staffers noting down something from the motorman, and then the train departed. Finally reached Vashi at 1636, late by 3 minutes. I had to rush to Platform 3 to board the 1637 Belapur local - the next one towards BEPR is only at 1651! I didn't want to spend time doing nothing at the station! I reached home by about 1700. So thats it for the day! Bye!
railfanning