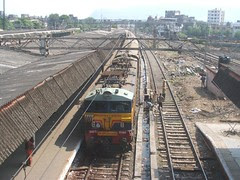 Today, I had the opportunity to click a sight that I had been witnessing for the past 4 days -The Pragati "Superfast" with a WCAM3. I had seen this train first with a WCAM3 on Monday. I had just got down from an EMU (at Thane, came from Vashi), and saw a WCAM3 hauled train in the characteristic livery. I first mistook it for Deccan queen, but the mis-matched Pantry, and SLR confirmed that it was Pragati. Then I thought, then I could have actually seen a WCG2.
The Next day - Tuesday - I again saw this train with a WCAM3. But the train was too fast to clearly see if I could believe by eyes! On Wednesday, once again I saw the same train with a WCAM3.
Finally, today (Thursday), I stood on the Foot-Over-Bridge armed with my camera to capture this train on camera. The train once again turned up with a WCAM3!!! So I guess that after the train was made a Super-Fast, the poor WCG2 couldn't keep to the schedule due to its lower speed of 80kmph. Finally to maintain higher speeds, WCAM3 could have been allotted. The WCAM3 is a rugged looking beast and churns out 4600 hp of power speeding upto a maximum of 105 in both AC as well as DC traction!!!
Other sightings of the day were: Sewagram with a WCAM3, AbuRoad WDG3A with a BOXC rake and Konark with a WCG2!
I think, I'll finally change over to my old route (Via CLA) from tomorrow evening onwards! So - let me wind up for the day. Thank you and have a good day!