Another day at Panvel 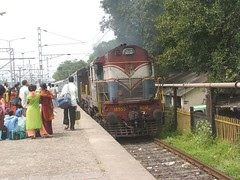 Today was just another day..but filled with misses! First - I wanted to board the 12:02 Panvel local from Belapur. By the time I reached the platform, the EMU had already departed! I took the 12:23 EMU towards Panvel. I was sure that I would miss the loco of Sampark Kranti and that happened! The EMU reached Panvel at about 12:45. I went to the ticket counter and purchased a Platform ticket. The Sampark Kranti had already reached Platform 1 of the station. I rushed towards the loco, and found three RPF officers roaming near the loco. (Photography was certainly out of question!). I rushed to Platform 3. By now, the Ratnagiri Dadar passenger pulled in. The loco was WDG3A #13059 from Pune. I couldn't photograph that loco too! I barely managed to have a glance of the loco working the Sampark Kranti and that was WDM2 #16860 from Ernakulam. All I could see was the loco notching up to depart from the Platform. The train took about 8-10 minutes to clear the outer signal.
Both the Sampark Kranti as well as Dadar passenger were given starters at the same time. The station dipped to total silence as soon as both the trains went out! There was one lone Self propelled accident relief train which was waiting for a signal on the main line. The train pulled out at about 1300. By now, the arrival of Trivandrum bound Netravati express was announced. The loco was already visible. One RPF constable was standing quite close to me. I moved a bit away and decided to wait for the loco. The loco was WDM3A #18555 from Erode. This particular loco was with Golden rock earlier and was recently transferred to Erode. The loco is a good smoker, and I had spotted it at Alwaye this August. The RPF fellow was roaming quite close to me, and I decided to keep away. Some time later, the Netravati pulled out of the station. By now, WAG7 #27240 from Ajni pulled in from the JNPT side with a long Container rake. I returned to the main platform to refill my tummy. I read a notice written on the Notice board kept near the Guard's Lobby. They were opposing a railway move to shift the Driver/Guard lobby to Jasai. Right now, Panvel has a Guard/Driver lobby where crew are based. Freight trains regularly change crew at Panvel.
Some time after 1330, the PA system blarred the arrival of Mangala Express on Platform 2 (???). This train used to be handled earlier on Platform 1. People are adjusted to boarding this train from Platform 1, and suddenly shifting the train to Platform 2 was very difficult for passengers. I saw people carrying tonnes of luggage crossing over to Platform 2. Platform 2 filled up in minutes and the platform was swarming with people (with heavy luggage) waiting for the Nizamuddin bound Mangala Express. Sometime later, a WCAG1 (#21970) pulled in with a "Flat Car" rake. The wagons were carrying 7 tractors each. I had seen the loco dozing of at Panvel yesterday! So where did the loco pick this rake from?
Some time later, a rajdhani liveried loco was visible at a distance, and that was Mangala Express. The rake slowly inched towards the Platform. The loco was WDM2 #16565 from Ernakulam. The train unloaded a huge number of Malayalees and continued its journey up north! I took an EMU and returned home! The day was tiring and I was totally drained out by the time I reached home.